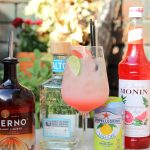 Ten Green Bottles are well known for their craft beers and gin but they are equally adept when it comes to cocktails. Back in summer 2019 we caught up with Ben Errington over at Ten Green Bottles in Stone, who generously shared the recipe for this delightful summer cocktail.

You can use alternative brands of tequila and orange liqueur if you have them, or comment to tell us what spirits you have in your cabinet and we’ll challenge Ben to come up with a cocktail recipe for you.

Be sure to pay Ten Green Bottles a revisit when they reopen to have it made for you: 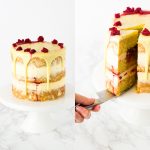 As most of us are rattling around the house with plenty of time to get our aprons on, we thought we’d share some recipes from the Sauce archives. This is an oldie but a goodie from the very first issue of the magazine, two whole years ago.

You may not be able to visit the lovely Beth Lauren Cake Parlour at the moment, but if you can get your hands on these ingredients you can recreate this beauty at home. The recipe makes one 6 inch cake.

When the lockdown is over, you can head to the Parlour for coffee and a professionally made cake:

A time-honoured menu staple of restaurants and pubs across the land, steak comes in many guises despite – or perhaps because – the methods of cooking it are so straightforward….

A time-honoured menu staple of restaurants and pubs across the land, steak comes in many guises despite – or perhaps because – the methods of cooking it are so straightforward.

Unless you’ve done your research, it can be tricky to know which cuts to buy and what to pair them with when you want to cook beef steak at home. Luckily, we’ve tapped into the knowledge of chef and restaurant owner Rich James from Smoke & Rye, so that you can buy and prepare three of the most flavoursome cuts with confidence.

First of all, how do you recognise a good steak when you’re out shopping? Rich’s first tip is to get to know your local butcher.

“Your butcher should be able to recommend you a good steak. He or she should know their stuff about where the animal has come from, how it’s been bred, how long it’s been fed grain, how it’s been looked after. From the lines of the beasts themselves to how they’ve been treated in the abattoir, provenance is really important. And marbling is key – you don’t want it to be plain and boring.”

Thicker steaks are easier to work with as well. Fine-grained fillet tends to be finished in the oven because of its shape, allowing the heat to be distributed evenly.

“It will take a bit more time, but you get more opportunity to cook it how you like it. We don’t deal with anything below 10oz here, apart from fillet because it’s a smaller cut. For sirloins and ribeyes you need to have a thick cut because you need to be able to caramelise the edge, but keep the right cooking temperature in the middle. If it’s too thin, you won’t be able to get it rare or medium; it will be at least medium-rare by the time it’s on the plate.”

Starting with Rich’s personal favourite, the t-bone is a cut from the sirloin but includes a section of tenderloin, also known as fillet.

“You’ve got two very different cuts of meat on there, really,” Rich explains. “One has a lot of marbling – sirloin is a lot more fatty than fillet, which is a lot leaner – but it gives you the chance to have texture and flavour in the same piece of meat. It’s the best of both worlds.”

It makes the cooking process a bit of a challenge, because it can stay a little rare around the bone. Fillet tends to be better cooked rare or medium-rare.

“You’ve got to be careful that the fillet isn’t overcooked, but it’s not a big deal – it’s all in the resting. Caramelise it, let it rest, have a feel, and if it’s underdone bang it back on the grill for a few minutes. The other thing about the t-bone is that you want to over-season the fillet. There’s less flavour in it so you want to add more seasoning to that side than the sirloin side.

“It’s my favourite cut because you also get that bit of marrow from the bone, which is really good for you. I would cook off some bone marrow and run it through clarified butter, just to add some richness. You don’t want to add creamy, heavy, thick sauces, because you’ll lose the flavour of the meat.”

Ribeye steak is, as the name suggests, from the rib section of the beast. Some people are a bit put off by that fact that the ribeye still has the bone in, but it’s a purposeful decision in Rich’s kitchen because it adds so much to the dish.

“The marrow is where all that fantastic umami flavour is,” he says. “Again, caramelisation is key. It’s a bit thicker so there’s a bit more fat in it. To render that down you need a nice hot grill or pan, ideally. Don’t use butter to begin with because it will just burn. You need to be able to get in there with a bit of oil, caramelise it on both sides, rest it in butter and then finish it off in a pan with butter if you like at the end.”

With the ribeye, Rich recommends serving alongside a fresh, acidic garnish that will cut through the fattiness of the steak.

“It’s a big, bold steak – it’s not going to take well to the addition of heavy, fatty cream or anything like that, but the light, spicy, herby and vinegary flavour of the chimichurri works really well.”

The fillet is the leanest and most tender cut, making it great for raw preparations like tartare and carpaccio. As it’s the least fatty, it’s worth paying for the best raised and aged steak you can afford to get the best flavour. Rich prefers his fillet served medium-rare.

“I would pan-fry it to start with in some foaming butter to get it rare, add some blue cheese on the top, put it in the oven for about 5 minutes to get it almost to medium-rare, and then let it rest. Then I’d deglaze the pan with some brandy and some bone marrow gravy to get a really heavy, rich, flavoursome sauce.

“You want those rich flavours with fillet because it’s so lean. You still have flavour in fillet, but nowhere near the same level as in the other two cuts we’ve talked about. You’ve got to add, add, add when it comes to fillet, so plenty of butter, plenty of seasoning and plenty of other umami flavours to make it rich. The texture of it is amazing, though. I serve a little crouton at the bottom to soak up all the juices, a bit like an old Tournedos Rossini.”

Smoke & Rye’s menu is inspired by Rich’s travels and experiences with American food. So how do British steaks compare to those you’ll find over in the States?

“They use a lot of Kobe beef, which we don’t have so much access to here,” he says. “They get a lot of Japanese breeds imported. The Americans are well known for their steaks, but they work with their beasts in a slightly different way to us – they feed them and look after them differently, and of course they’ve got the climate so the animals are much bigger. American steaks and American wagyu are some of the best steaks in the world, and some of the most expensive.”

Another point of difference is the (voluntary) USDA beef grading system, which is based on the maturity of the meat and level of marbling, so that customers can be assured of the quality of the meat they’re buying.

“The system is really useful because it provides a clear, organised way of grading meat,” adds Rich. “At the top end is prime, followed by choice and select. Here, there’s no reliable way to tell whether a product is prime or select – it’s hit and miss, especially in supermarkets. It would be good if we could introduce that kind of system.”

Now that we’re moving towards the colder months of the year, Smoke & Rye’s style of food and cooking is really coming into its own. When it comes to the steaks on the menu, there’ll be a move towards heavier, creamy sauces and red wine or barbecue gravies, often incorporating the delicious juices from the smoker.

“We don’t tend to make things overcomplicated for no reason. Our customers come for amazing quality ingredients and simple but decent cooking. Whether you’re grilling or panfrying your steak, it’s always a high temperature and resting properly that are key. You want that Maillard reaction going on to get as much caramelisation on the steak as possible – it adds texture and it adds flavour.”

Popular Stone restaurant Little Seeds will shut its doors for a week at the end of August as the eatery receives a makeover to give it a fresh new look….

Popular Stone restaurant Little Seeds will shut its doors for a week at the end of August as the eatery receives a makeover to give it a fresh new look.

After opening its doors in June 2016, the restaurant has flourished in a town which is quickly becoming known as the foodie capital of Staffordshire. The team recently celebrated their third anniversary and are now gearing up to create a new dining environment to better reflect their ever evolving menu and ethos of using the best seasonal produce in the UK.

Owners Sophie and Jake describe the changes as ‘Little Seeds 2.0’. They hope to take the popular restaurant to a new level, developing an experience that all their customers can enjoy.

Alongside the fresh new look, they will be launching a new menu – ‘A Taste of Little Seeds’ – that’s been designed to provide guests with a fresh dining experience and the chance to try more of what Little Seeds can offer. The Taste menu will be running alongside their current à la carte menu on Friday and Saturday evenings.

The restaurant will be closed from Monday 26 August until Tuesday 3 September for the refresh. In the meantime, you can still view the summer menus and book your table via the Little Seeds website. 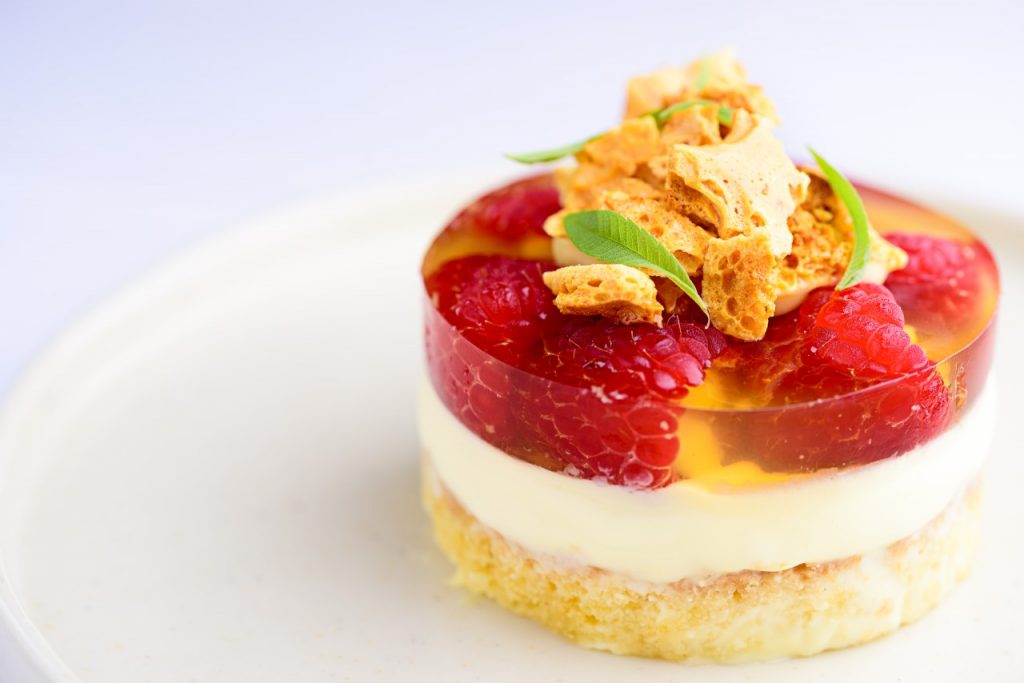 END_OF_DOCUMENT_TOKEN_TO_BE_REPLACED
No Comments on Little Seeds 2.0 is coming soon