All the world’s a pub 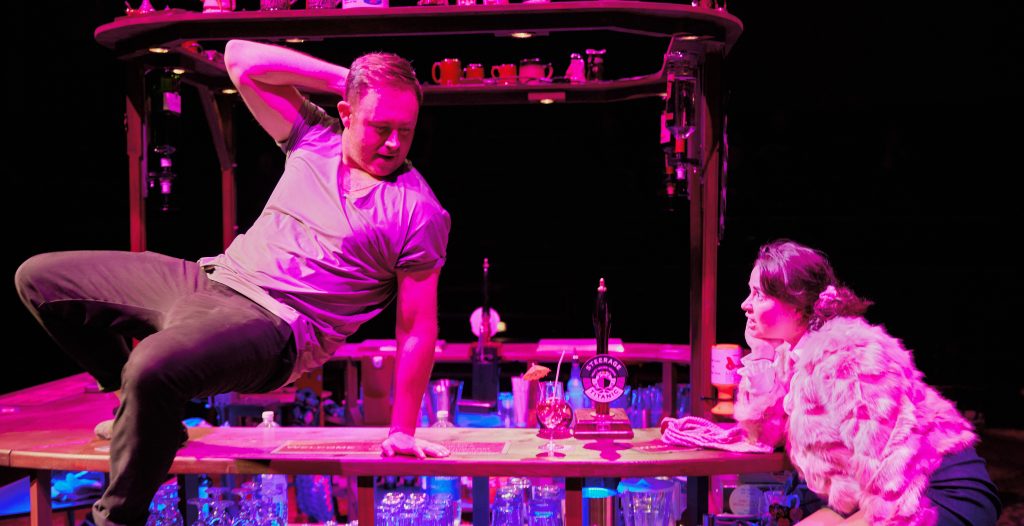 Theatre reviews might not be obvious subject matter for Sauce, but food and drink and culture are inextricably linked, perhaps nowhere more so – at least in an English context – than in the pub. So when we were invited to see Two at the New Vic Theatre in Newcastle we jumped at the chance.

In terms of hospitality, the theatre is welcoming and homely. Downstairs you’ll find a gin and bottle lounge, open since August 2019, which offers a relaxed environment to gather pre-show. Every gin and beer is sourced from within a 30 mile radius, from the hyperlocal Weal Ales, Titanic and Staffordshire Gin to Papermill Gin and Thornbridge beers from slightly further afield.

The restaurant at the New Vic has played host to themed evenings including a Bavarian night, wine and cheese night and Latin American night. Their recent French night featuring accordion music from Sophia Hatfield went down especially well.

This summer, with the auditorium undergoing a major refurbishment project, the team are keen to let people know that the bar and restaurant are very much open for business with plenty of events in the pipeline. Keep your eyes peeled for more on that in the coming months.

Written by Jim Cartwright, Two is a dark comic drama set in a northern town. For her directorial debut at her home theatre, director Ruth Carney decided that a typical Potteries pub would be a natural setting for the intimate and poignant production.

The audience are drawn into the action from the moment they enter, as the Landlord serves pre-performance tasters of beer from the working bar. Set up with the help of Burslem’s Titanic Brewery, the cast are able to pull (and knock back) real pints of Steerage from the central island.

Designer Lis Evans was inspired by the nearby Hop Inn, The Victoria, The Greyhound, The Marquis of Granby and the Staff of Life in Stoke. Mock Minton tiles, heavily patterned carpet and tired wooden chairs complete the transformation to traditional local boozer.

All the dramas of life are played out in the microcosm of the pub, where the Landlord and Landlady are constantly at each others’ throats whilst warmly welcoming patrons of all ages and circumstances. Originally scripted in 1989, there are times when the play feels slightly dated as well as times when it is difficult to watch, but the language is poetic and the dissection of human relationships is as relevant as ever.

Two actors – Samantha Robinson and Jimmy Fairhurst – play all 14 characters in Two. Their mastery of pace as they dart between costumes and accents, charting the emotional highs and lows of each storyline, is truly impressive. We’re spectators to arguments, affairs, loving friendships and abusive relationships as they veer from comic karaoke to chronic loneliness, and finally to the tragedy that has split the couple’s marriage apart.

The dark joke at the heart of the play is that, while the pub is where punters come to relieve their worries and cares, the Landlady and Landlord at the literal centre of it have lost their ability to talk to each other. The destructiveness of this lack of communication feels important to talk about at a time when the suicide rate in the UK is on the rise and mental health in hospitality is under the spotlight.

Get your tickets for the launch of Chocao