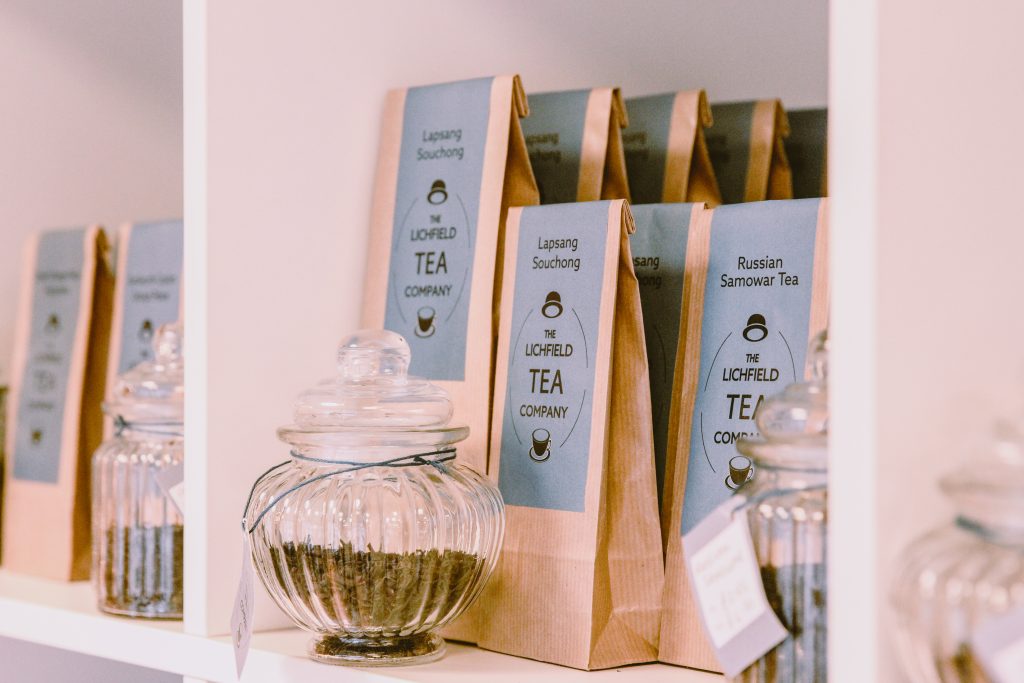 Sauce sat down with Rae Holland in her beautiful shop overlooking a courtyard in the Heart of the Country Shopping Village at Swinfen. She shared her inspiration for founding the Lichfield Tea Company.

“It was a hobby that turned into an obsession that took over my house, so we had to get a shop. It was something I used to do with my nan, who was Italian. In Italy they only drink coffee – they don’t drink tea at all. If you’re ill, you get chamomile.

“In the mornings she used to make everybody a cappuccino – she just called it milky coffee. I’m allergic to milk, so it would make me really poorly. She would then give me chamomile, which is a natural anti-inflammatory, so instantly I would feel better. She thought tea was magic. She didn’t realise it was an infusion – because it’s called chamomile tea, to her it was tea.”

Rae’s grandparents owned an old-fashioned newsagents and all-stores in Coventry when she was a child. Her grandma started importing tea for her to taste and to sell in the shop.

“So I grew up drinking lapsang souchong and Earl Grey,” Rae explains. “She really got into it and it was our little hobby. When they retired they moved to the South of France and we would take tea every time we went to visit. I started the shop with money from my share of the inheritance when they died.”

In 2016, tired of working 24 hours a day, 7 days a week in a stressful job, Rae and her husband Ollie decided to slow down a little and opened their first shop on the other side of Heart of the Country site. They moved into a larger unit when they outgrew the first premises, and have now expanded floorspace further by knocking through into the neighbouring shop. They have installed a kitchen and will soon be serving ‘hearty, homely, vegetarian food’, cooked by Rae herself.

In terms of teas and the various coffees Lichfield Tea Company offers, choosing what to stock is largely a matter of personal taste with some family input and, of course, an eye to what customers will think.

“I try it, and if I like it, we sell it,” laughs Rae. “When my grandparents had their shop they kept meticulous accounts. My uncle still had records of some of the tea gardens. So we still had a connection, for example, with Kenilworth. My grandparents were in Coventry so they recognised the name and went with it; now we stock tea from the same garden in Sri Lanka.”

English Breakfast is by far the most popular choice. Naturally, visitors to the shop tend to be blinded by the sheer number of options with around 80 teas in stock on Rae’s shelves at any given time.

“It’s much easier to have a conversation with someone and make a recommendation based on what they like and whether they want to try something new,” she says. “We’re thinking about a tea passport, where we have a little description and space for comments to keep a record of what you’ve tried.”

Rae’s seasonal picks for March, April and May start with the aptly named Spring Tea, a fresh and floral green tea with strawberry and rose.

“We also have this Japanese black tea, which is a real little find. It doesn’t smell particularly, but it tastes like the centre of a Malteser. It’s really light but flavoursome, so ideal for spring.”

If you’re looking to push beyond your comfort zone and try something unique, Rae recommends Pu-Erh – a real tea lover’s tea.

“It’s a fermented tea so it’s super good for you, like kimchi. It’s only grown in the Yunnan province of China. They come in cakes, and they get more expensive the older they are.”

As for the recent trend for cold infusions, Rae has no truck with the idea that shaking a teabag in cold water is the way to go…

“If you want cold tea, make a really strong cup of fruit tea, hot, pour it out and put ice in it,” she suggests. “We do a lemon tea that’s basically homemade lemonade in a very sweet vat of strong English Breakfast. It looks like pond water but it tastes amazing and goes down a storm.”

Interestingly, the recent resurgence of interest in tea after years of growth in coffee seems to be driven by a younger generation, with new brands like T2 and familiar names like Whittard benefiting from the attention.

“The people who are most excited about it are the 18-24 year olds,” Rae enthuses. “It captures their imagination and they love trying something new, and they love the fact they’ve discovered you.”