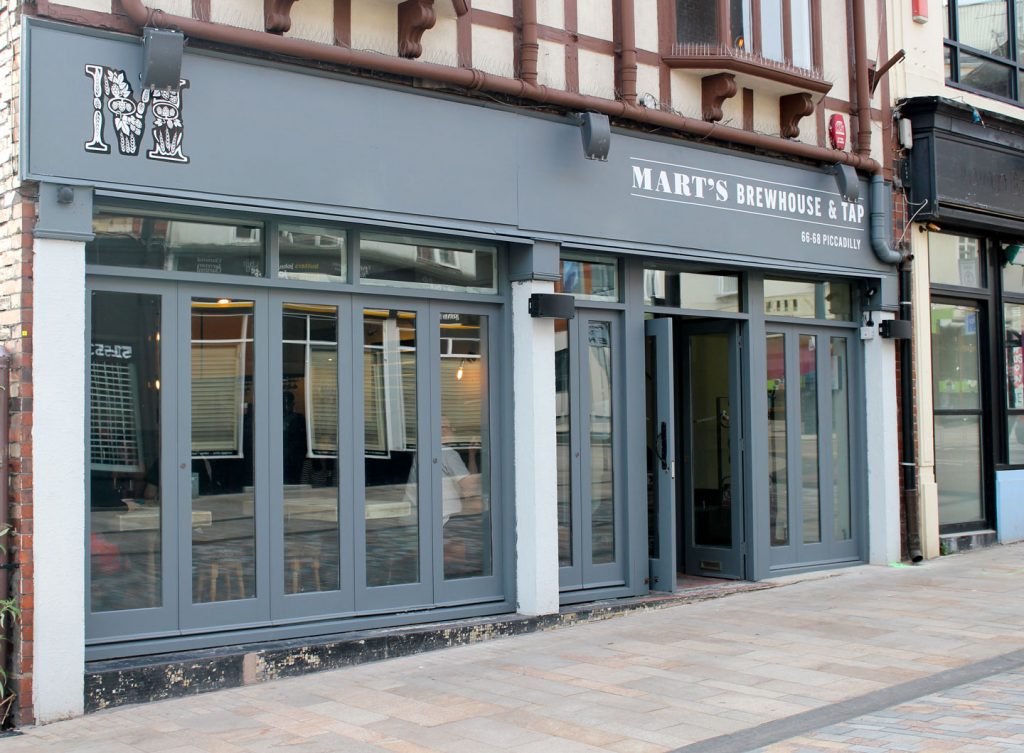 Right in the heart of the Cultural Quarter and directly opposite The Slamwich Club, which opened just a couple of months ago, Mart’s Brewhouse welcomed us with floor-length windows and a great atmosphere for its launch night on 22 June.

Sauce grabbed a few minutes from a very busy evening with Holly, who launched Mart’s Craft Beer with husband and head brewer Will back in January 2017. Originally a venture between Will and his brother, the name is in memory of their late dad.

Inspired by a trip to New York six years ago, where the craft beer scene had recently exploded, Will and Holly couldn’t find anything similar back home in Stoke-on-Trent, and so began to brew their own ales at home. They later graduated to a 1000 litre kit in an industrial unit in Knutton, selling at makers’ markets and local outlets like BottleCraft, Klay and The Hopwater Cellar while still working full time.

“The Brewhouse and Tap was just a tiny idea we had that we thought we’d do eventually – it’s happened quite a lot quicker than we thought it would!” says Holly.

Holly and Will brought Jason Barlow and Sue Grocott on board with the new venture, bringing an invaluable 20 years of experience in running bars and keeping a good cellar. Call in and you’ll be faced with a choice of 8 cask ales as well as craft and continental beers – not to mention a selection of gins and wines.

With a fresh but traditional pub feel and windows directly onto the gleaming brewery in the downstairs bar area, it’s taken a great deal of hard work to transform the building, which was empty for around four years. Most recently it housed Club International, but it seems the bold colour scheme was inherited from one of its previous incarnations as a tapas restaurant.

Going from a one barrel to a barrel brewery means the team will be able to keep the five core brews on the go – a pale ale, an IPA, a marzipan stout, a porter and an IPA brewed with tea – while also allowing room to be more adventurous.

“The good thing about us having the bigger brewery is we can start to experiment a lot more with different hops and other ingredients,” Holly explains. “The craft beer market is driven by choice – people want lots of choice and you have to be constantly changing.”

Although a kitchen is not on the cards in the near future, customers are welcome to order from neighbours like Klay and Slamwich Club and eat while they drink – a great example of local businesses supporting each other.

“I’ve lived in Hanley for nearly 10 years now,” Holly adds. “In the last 18 months or so this stretch has really opened up. The more little businesses come, the more people it will bring to the area.”

Plan are in the works to build a stage on the spacious first floor to host live bands, comedy nights, acoustic sets and so on. Brewery tours and brew-your-own masterclasses are also in the pipeline.

While Will’s looking forward to brewing on the new kit for the first time this week, the team are also keen to support other budding home brewers having fun with their own creations. The winner of a Potteries Home Brew Club competition will be along in August to brew his winning beer on the Mart’s kit.

You can now Forage at Coppice